Gasholders have been iconic landmarks on the Reading skyline for over 100 years, particularly from Newtown and the Great Western Railway. The demolition of Reading's largest and last remaining one, Gasholder No.4, was approved on 13 November 2019. This blog explores the story of the town's gasholders and gasworks through images from Reading Museum's collection. Gasholder No.4 from the River Thames Industrial Reading by the 1960s Gasholder No.4 from Newtown

This photograph from about 1900 shows the gasholders of Reading's first gasworks that was set up in 1818. This early gasworks was located in the town centre on the north bank of River Kennet in an area that is now part of The Oracle shopping centre. It was originally accessed from nearby Bridge Street along Gas Lane. Just behind the gasholders can be seen Reading's former Yield Hall (Yield Hall Lane is still there today, located beside the historic George Hotel). 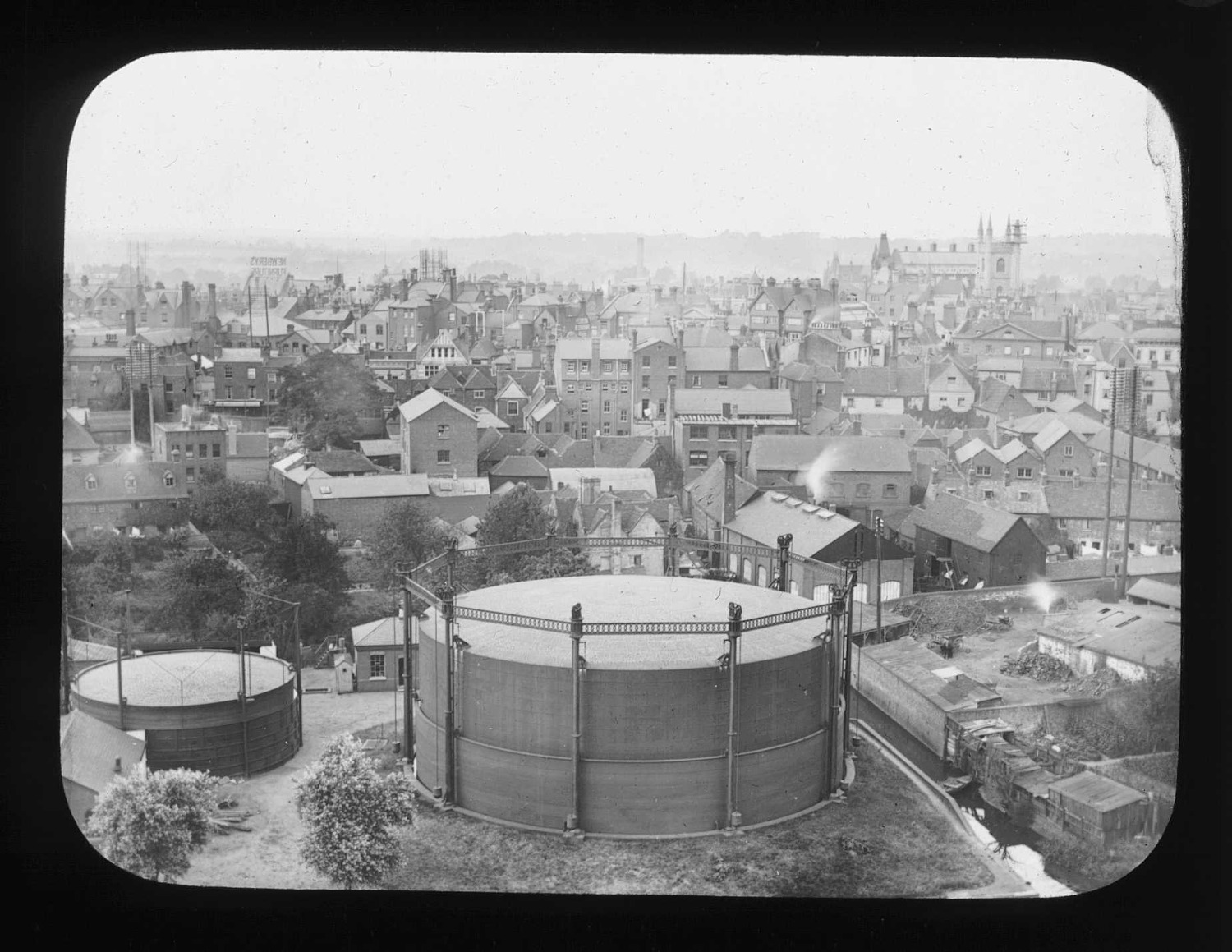 This print of about 1870 shows the Reading Gas Company's works in the centre of the view on the north bank of the River Kennet, with the the Seven Bridges Brewery of H&G Simonds on the left (which was designed by Sir John Soane), and the tail-race of St Giles' Mill bottom right and the High Bridge to the right.

The Reading Gas Company was formed in 1818 and on 5 November 1819 (Bonfire Night!) the main streets of Reading were lit by gas for the first time. The new gas lamps were considered to be 'not only ornamental but a great protection against noctornal depredators'. However by the 1830s there were widespread complaints about the quality of the lighting, leading to the formation of the rival Reading Union Gas Company with its new gasworks just off the Kings Road in the east of the town, also beside the River Kennet. This new competition led to cheaper prices and better service for customers including an expansion in street lighting.

Reference: W.M. Childs, reprinted 1967, Reading During the Early Part of the Nineteenth Century 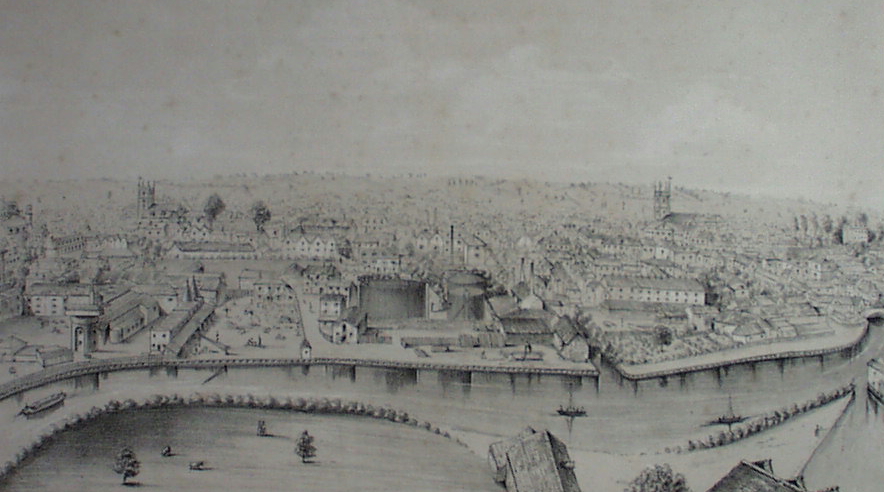 In 1880 Reading Gas Company bought a 13-acre site from William Isaac Palmer of Huntley & Palmers biscuit company to expand its Kings Road gasworks. To access the enlarged gasworks the Gas Company created the private Gasworks Road through the southern part of the Huntley & Palmers Biscuit Factory and over a new brick and iron bridge. This photograph by Jim Harold is part of a series of 50 commissioned by Reading Foundation for Art, and exhibited under the title 'A Reading Record' in 1980. It shows the large cast iron Borough of Reading coat of arms that still decorate the bridge.

Many archaeological finds were found during the construction of the bridge and gasworks between 1880 and 1882. Contemporary newspaper articles mention many medieval and Roman artefacts found in 'various stratifications of the Kennet beds' during the digging of foundations for the new iron bridge. These finds were recorded by Reading Museum's first curator Dr Joseph Stevens and many were displayed in the new Reading Museum which opened in 1883. 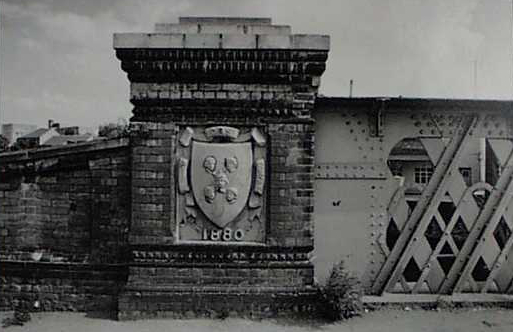 The Reading Gas Works Offices and Showroom was on Friar Street at the junction with Cross Street (it is now Haslams estate agents). It is a fine Edwardian building in brick and stone with a French-style corner turret, designed by Reading architect George William Webb (1853-1936) who was also a director of the Reading Gas Company. This watercolour shows it decorated for the coronation of King George V and Queen Mary in June 1911, emblazoned with the Royal and Borough coats of arms. The grand scale and prestigious location close to the Town Hall show the important status of the town's private gas company at the start of the twentieth century. 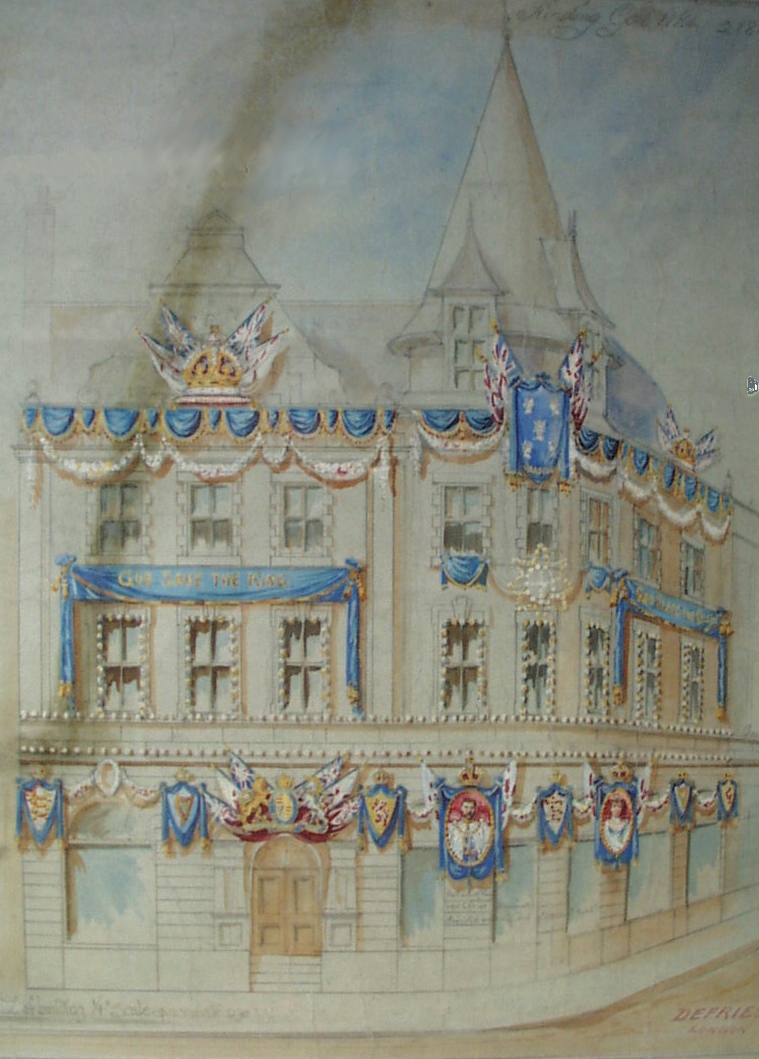 Reading's nineteenth and twentieth century gasworks produced coal gas (also known as town gas) by heating coal in the absence of air to create a fuel that was piped for lighting and heating across the town. They were often located beside rivers and canals for the easy delivery of coal by barge. From the late 1960s the UK converted to North Sea natural gas and the coal gasworks gradually closed. Many gasholders, including Reading's, were retained to store natural gas and to balance pressure in the supply network.

This photograph shows a pile driver at work on 'Simplex' piles for the foundations of no.4 gas holder at Reading Gasworks in about 1905. The man in the white coat and straw hat is Mr L.A. Rumble, site representative for the construction contractors Messrs C. & W. Walker of Donnington, and later Assistant Engineer and Manager of Reading Gas Company (1916 to 1938). In the background is the Sulphate of Ammonia Plant, built about 1894, later housing the Liquor Concentration Plant. Sulphate of ammonia was a by-product of the coal gas production process and was used as a fertiliser. 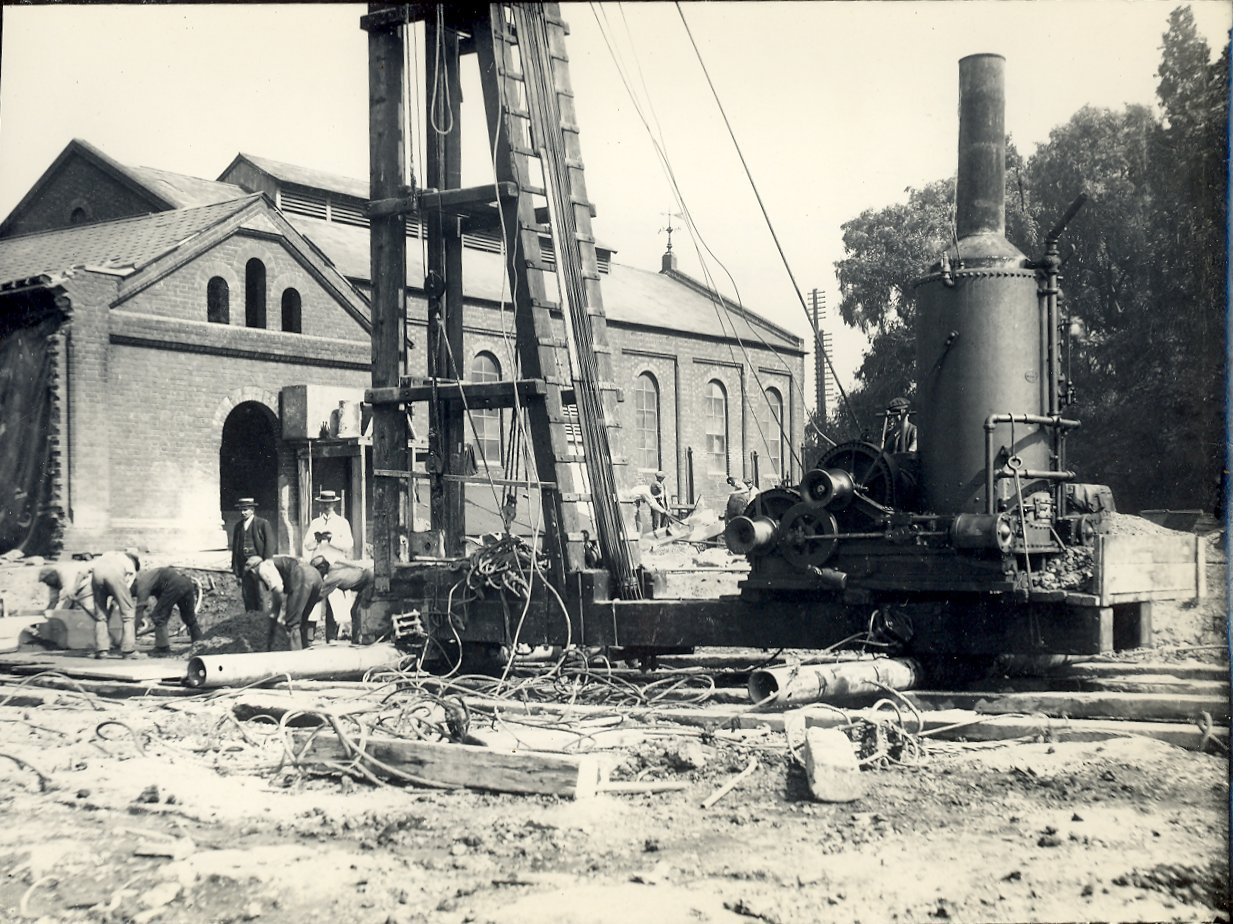 This watercolour, painted in 1927 by A. Rawlings, is titled Steam and Stream (A January Morning near Reading). It shows a view of the River Thames, the Great Western Railway (GWR) and gasholder no.4 at Reading near Kennetmouth (where the River Kennet joins the Thames). The building on the left is The Dreadnought pub, now part of the University of Reading rowing club. Reading Gasworks were served by the Huntley & Palmers Biscuit Factory freight sidings off the GWR mainline. 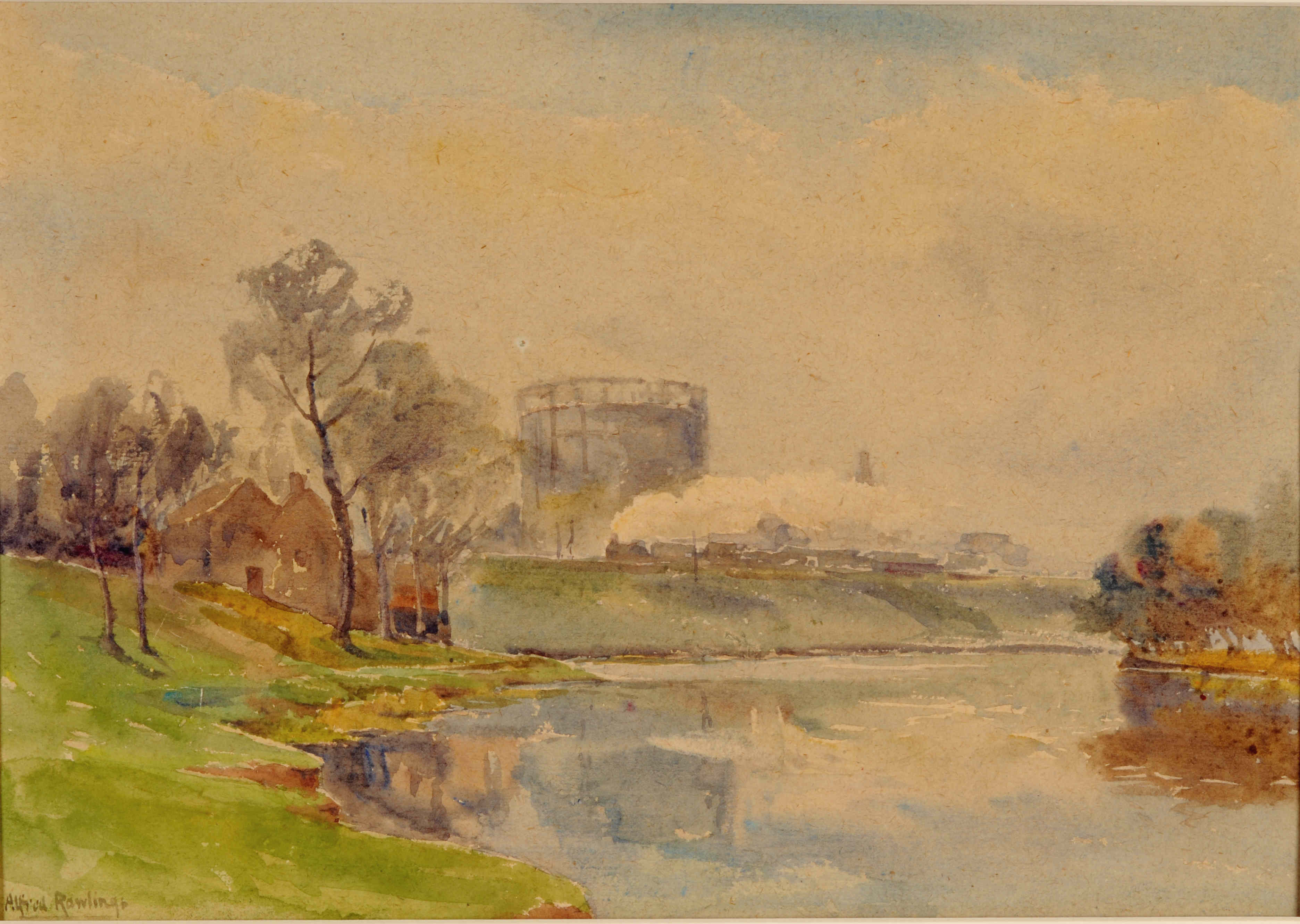 This mid-1960s aerial photograph shows how Huntley & Palmers biscuit factory, in the middle of this view, dominated the east end of the town centre for 130 years. However by the 1960s there was little room for expansion as it had become surrounded on all sides, including by the gasworks at the bottom of the image. The old biscuit factory buildings were inefficient and difficult to modernise so it was inevitable that production was eventually moved to Associated Biscuits' Liverpool factory in 1976. When Huntley & Palmers finally closed in Reading its collection, including biscuit tins, was given to Reading Museum. At about the same time the gasworks were being converted to natural gas from the North Sea. 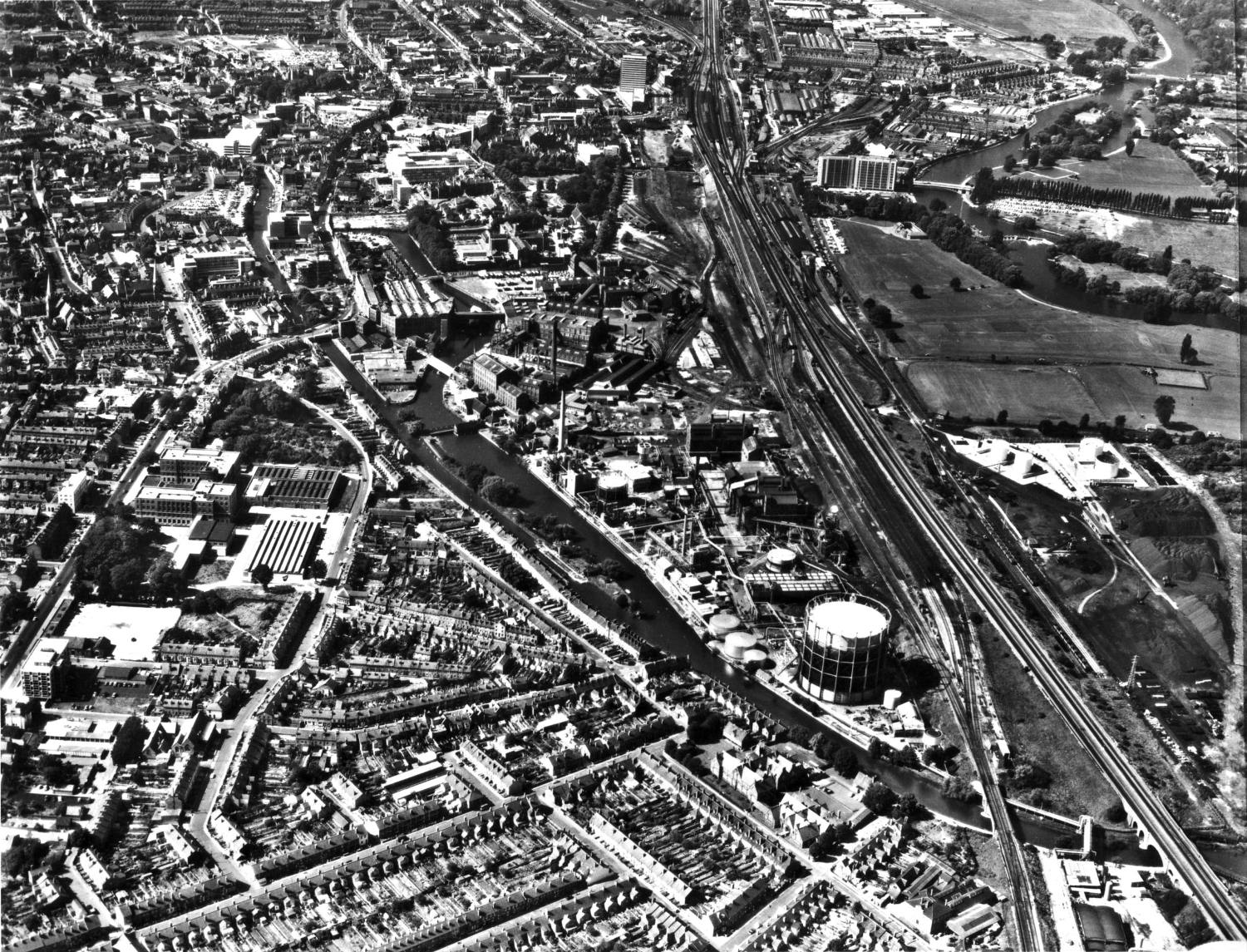 Gasholder No.4 dominates the nearby streets of terraced houses in Newtown in this sketch made by Kate Lockhart in March 2013. This drawing is one of a set commissioned by Reading Museum as illustrations for the 2012/2013 Happy Museum funded project 'Revealing Reading's History'. This project sought to engage with communities in some of Reading’s neighbourhoods. Lockhart's distinctive, spontaneous drawing style captured the area's current appearance. 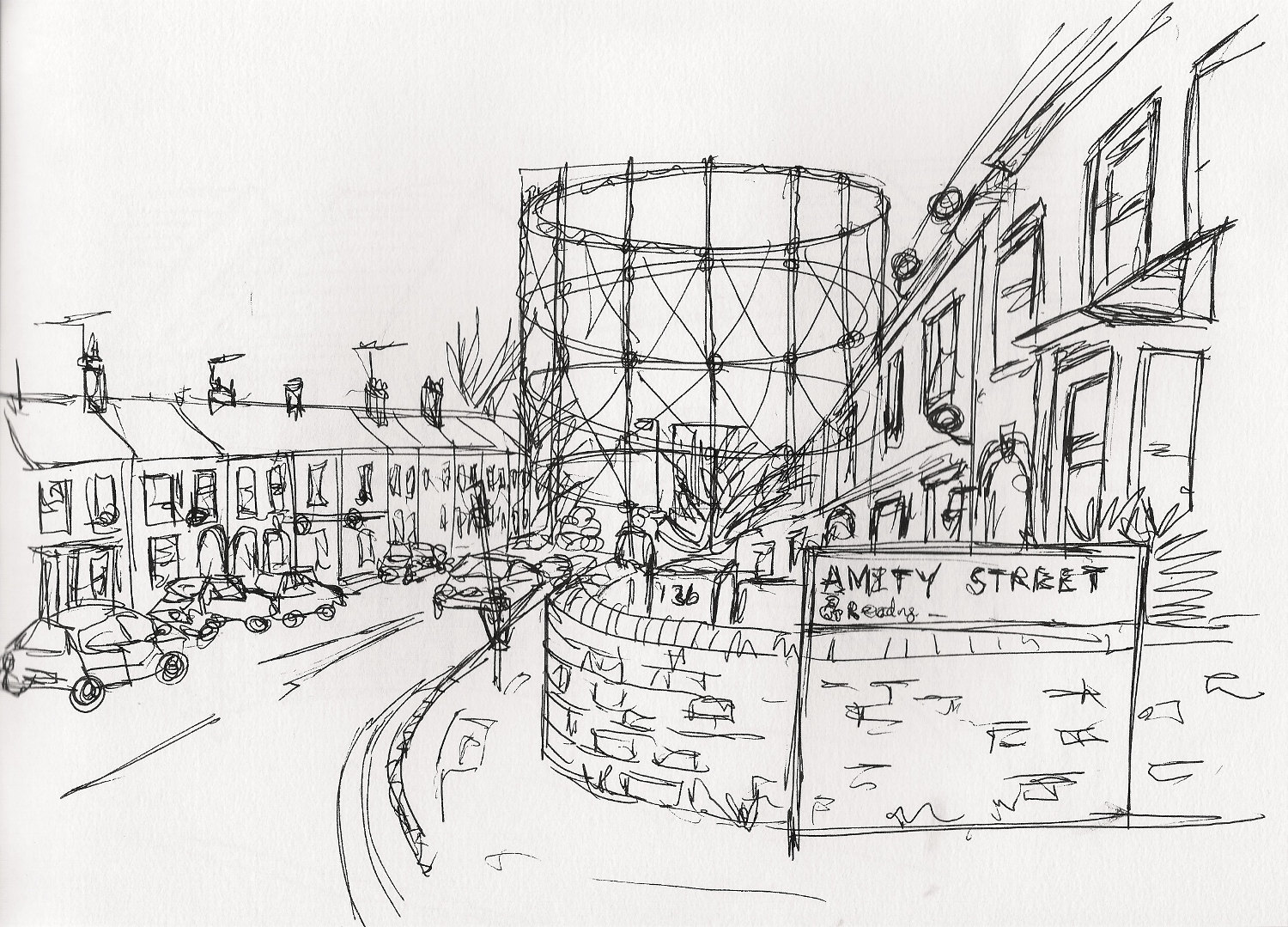